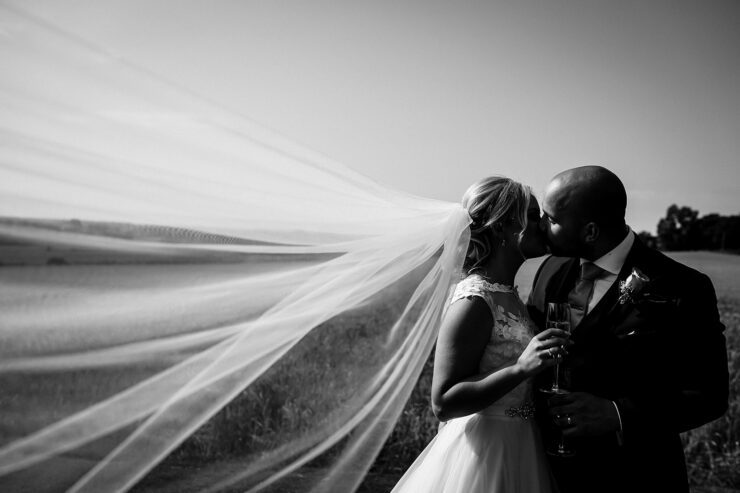 Meeting for the first time in Rawtenstall whilst out with friends, Rebecca and Elliott clicked immediately. Elliott lost his phone at the end of the night so asked for everyone’s phone numbers by messenger; Rebecca sent hers hoping he’d get in touch – and so the romance began!

Three years later they were thrilled to find out Rebecca was pregnant with their first child but they were both devastated when Elliott was unable to get home from Afghanistan for the birth of their daughter.

When he returned seven weeks later, Rebecca and their families travelled to welcome him home introducing him to Emelia Rose. Elliott chose this special time to ask Rebecca to marry him; it was the easiest ‘yes’ she’s ever had to say, and the rest of the weekend was spent celebrating.

After five years, they finally decided it was time to start planning their Summer wedding! Searching for venues online they had shortlisted 20 when Elliott found West Tower, and they both instantly fell in love.

“We were both absolutely blown away from the moment we arrived on the driveway, the stunning venue, beautiful grounds and most amazing views (even though it was raining) " – Rebecca 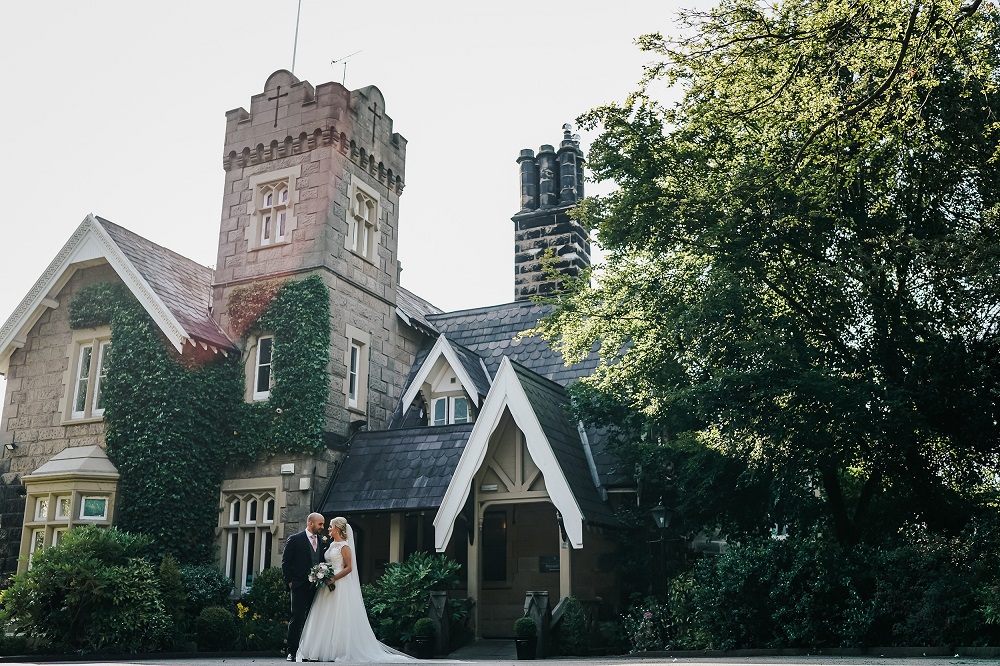 Style of the Day

Rebecca had a good idea of how she wanted their summer wedding day to look. Pinterest and Instagram helped put ideas together with the National Wedding Show in Manchester helping to source suppliers and give inspiration.

With her heart set on dusty mauve she went from there. They decided to have venue dressers to style their day for them who were amazing from start to finish.

Their three tier semi naked cake with macarons and caramel dripping was finished with summer flowers to match the bouquets. The ombre finished cake was filled with Ferrero Roche & Salted Caramel & Raspberry preserve and was a big hit! 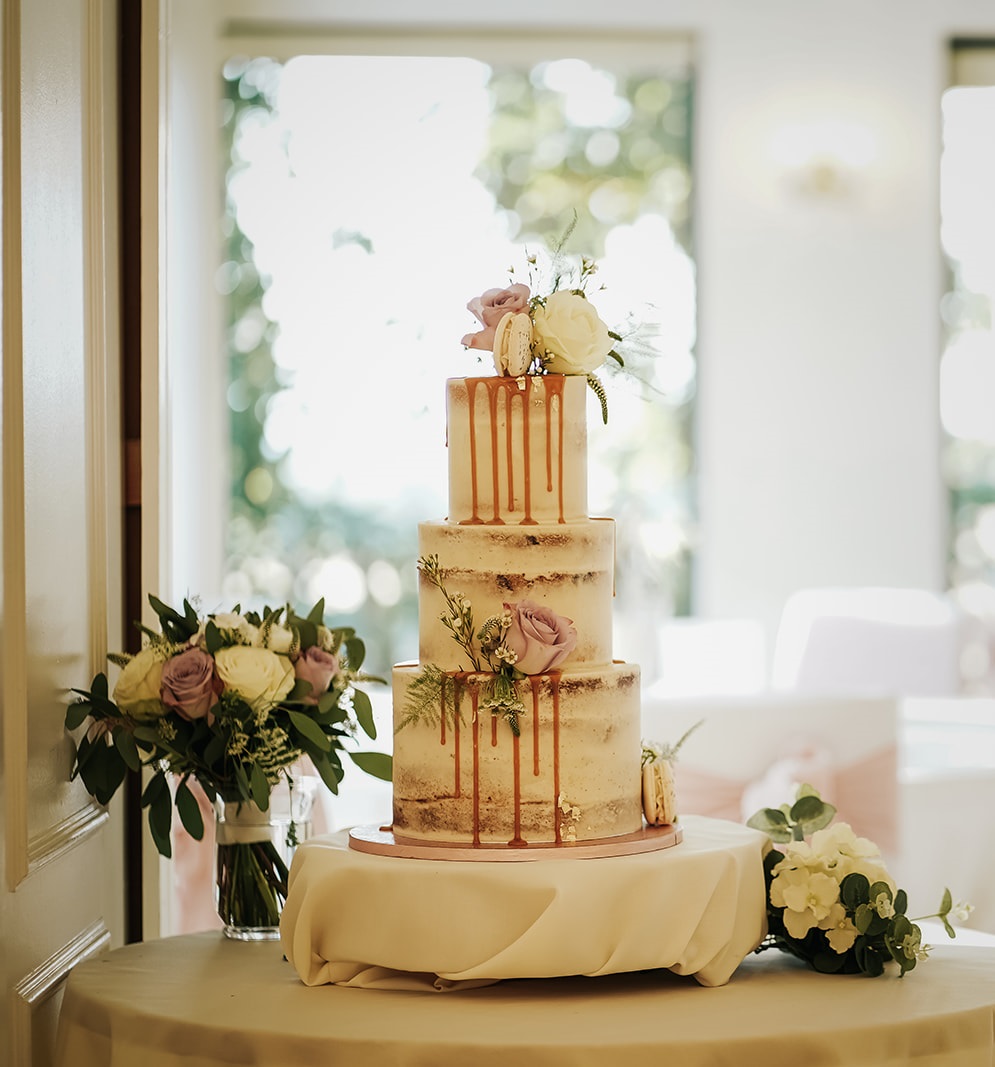 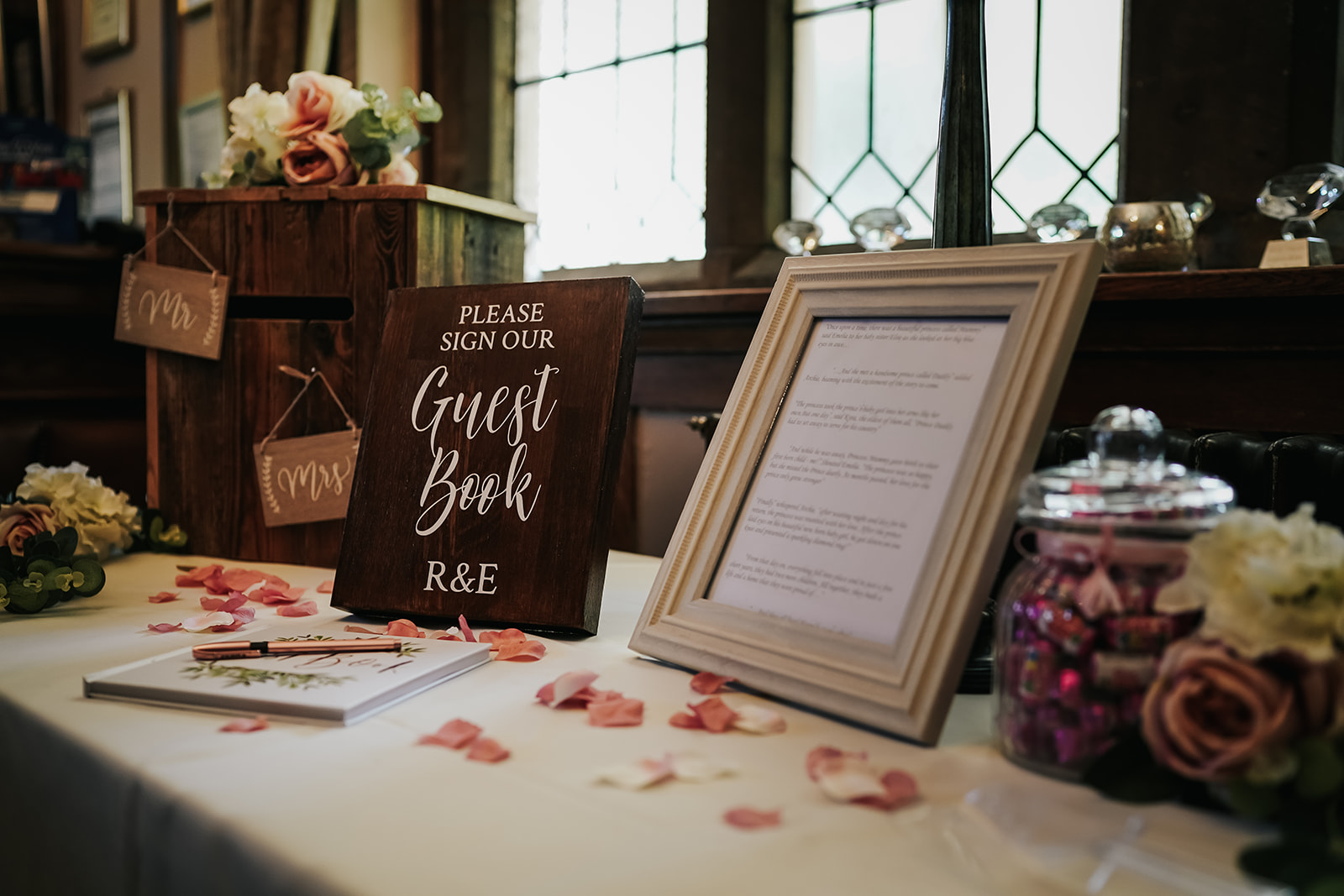 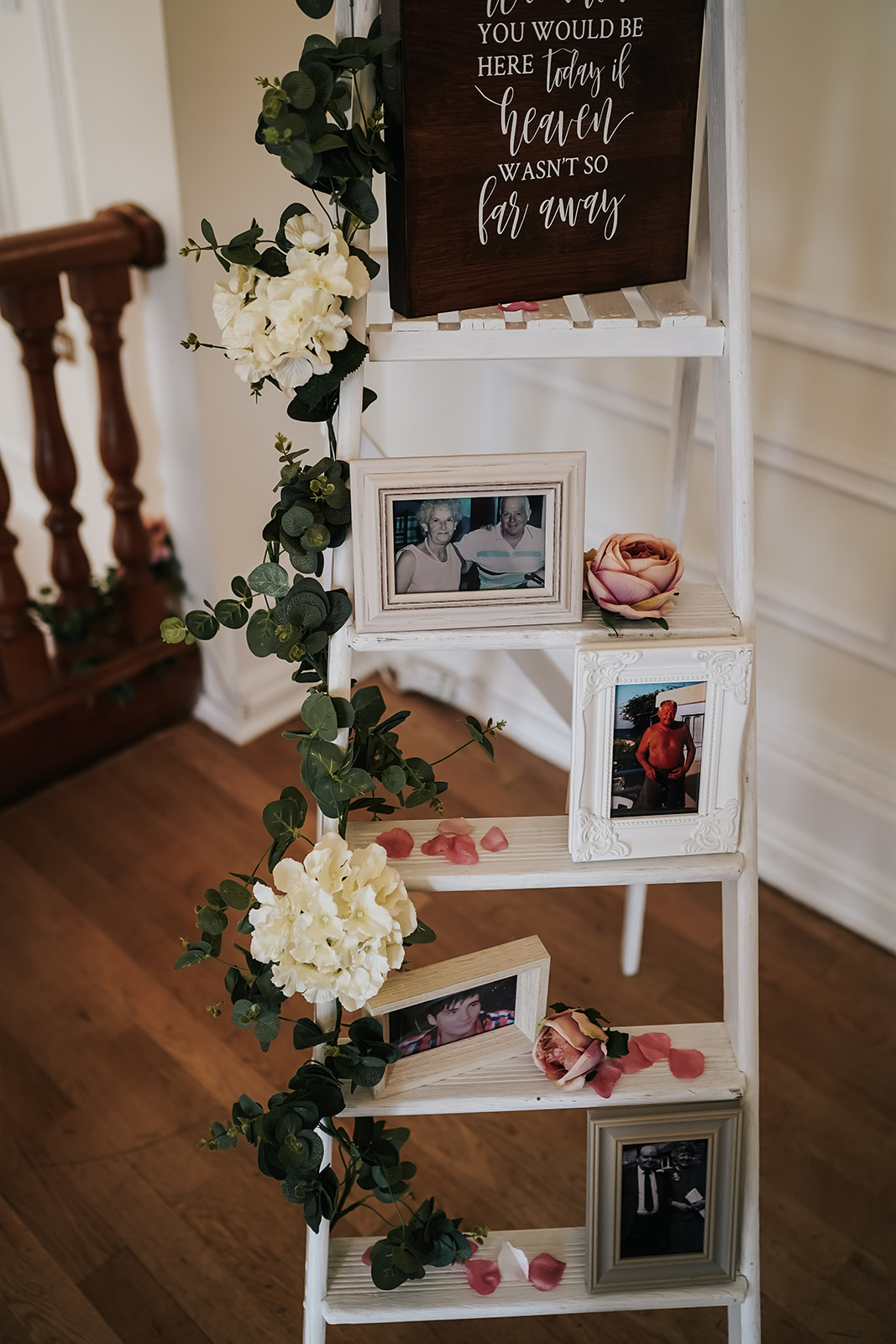 With a lace bodice, short sleeves, tulle skirt and belt, her gown was completely different to the photos she’d saved. As soon as she tried it on both Rebecca, her mum and her sister were all in tears!

Rebecca carried charms of her late grandparents on her bouquet whilst her dad carried her grandma’s wedding ring in his pocket! 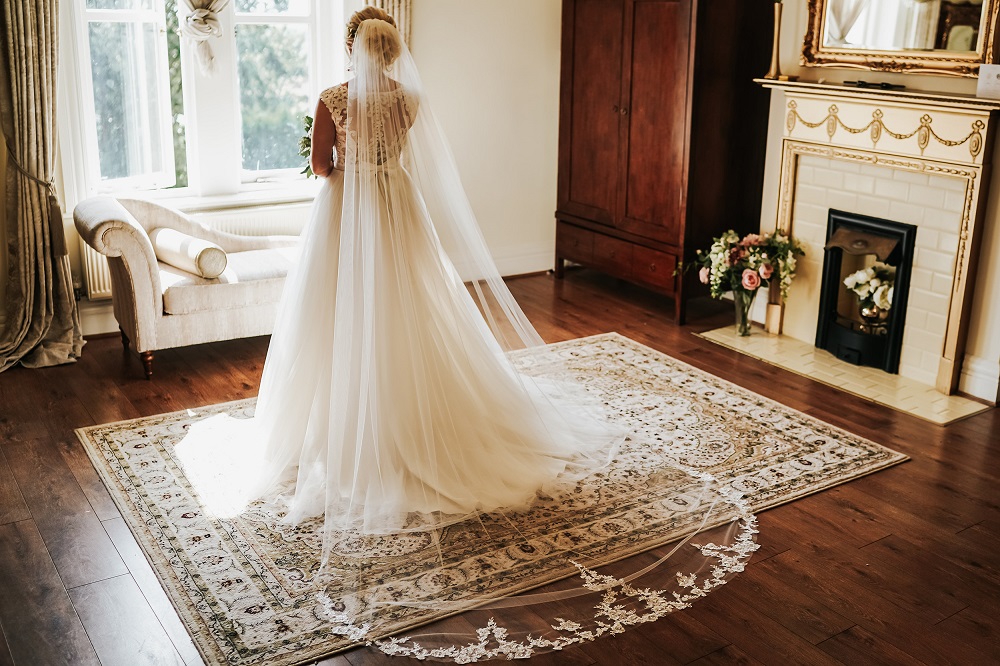 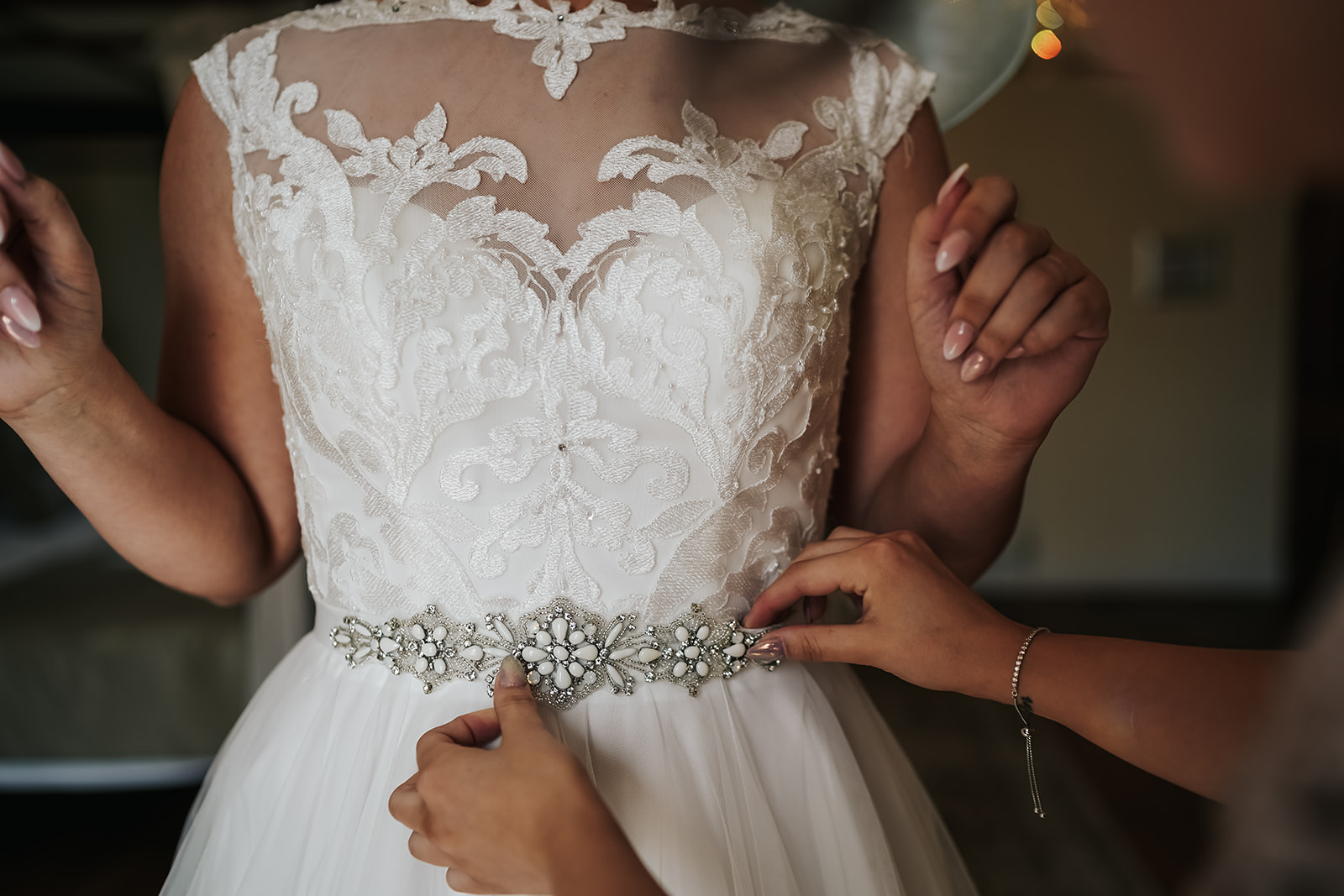 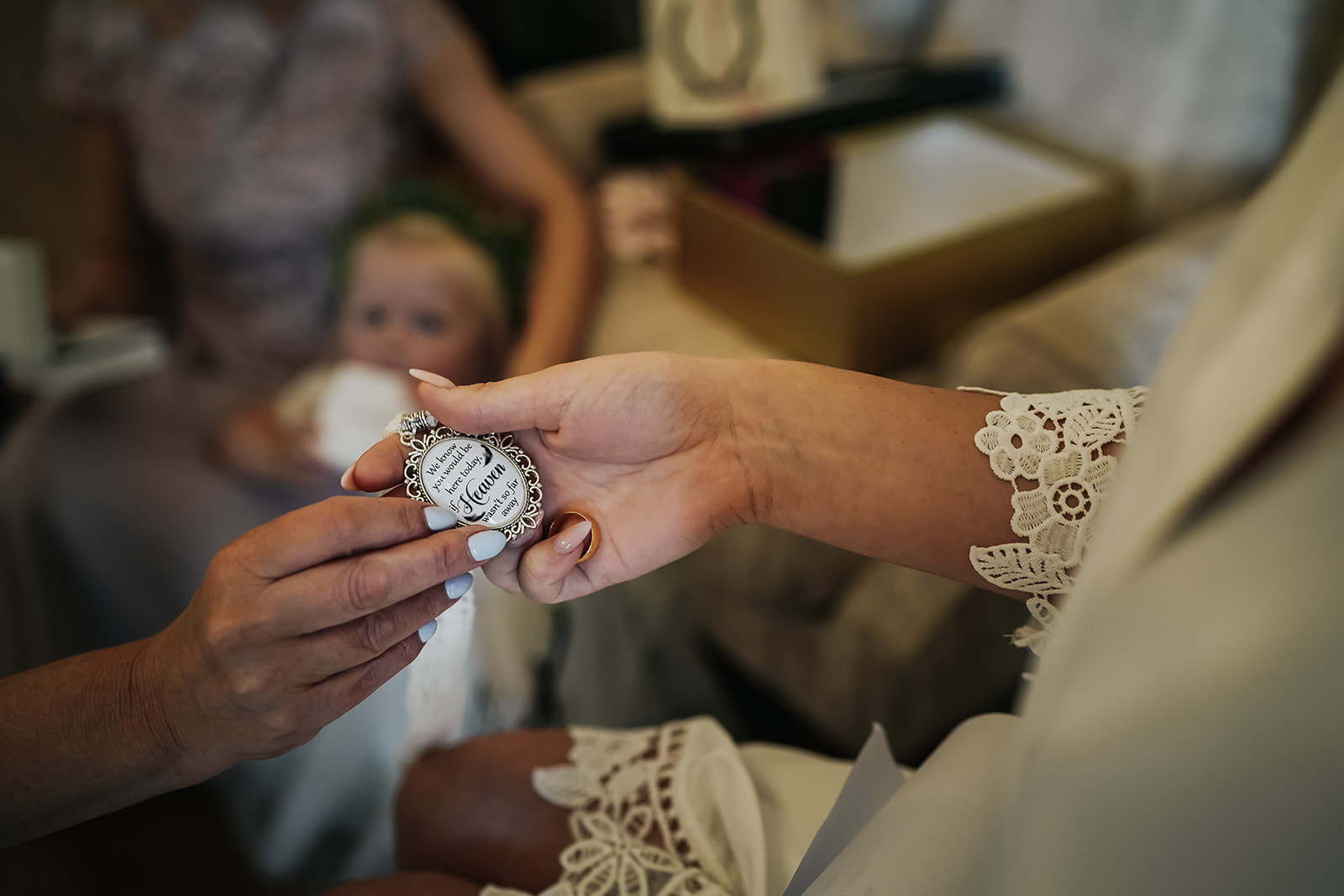 Elliott travelled to Manchester with his groomsmen to look at suits knowing what colour and style he wanted.

Rebecca didn’t want to see them beforehand – waiting until Elliott was at the bottom of the aisle on the day.

They all wore navy suits with the groomsmen wearing matching waistcoats, whilst Elliott wore grey.

A personalised silver pocketwatch was gifted to each groomsman in the morning to wear whilst Elliot’s gold one belonged to his late grandad. 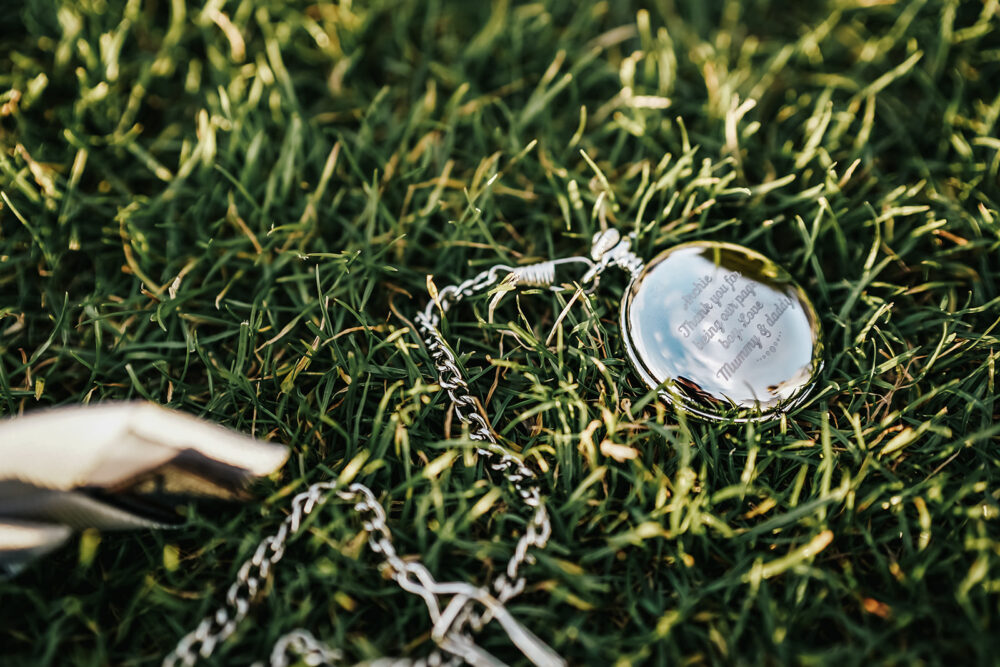 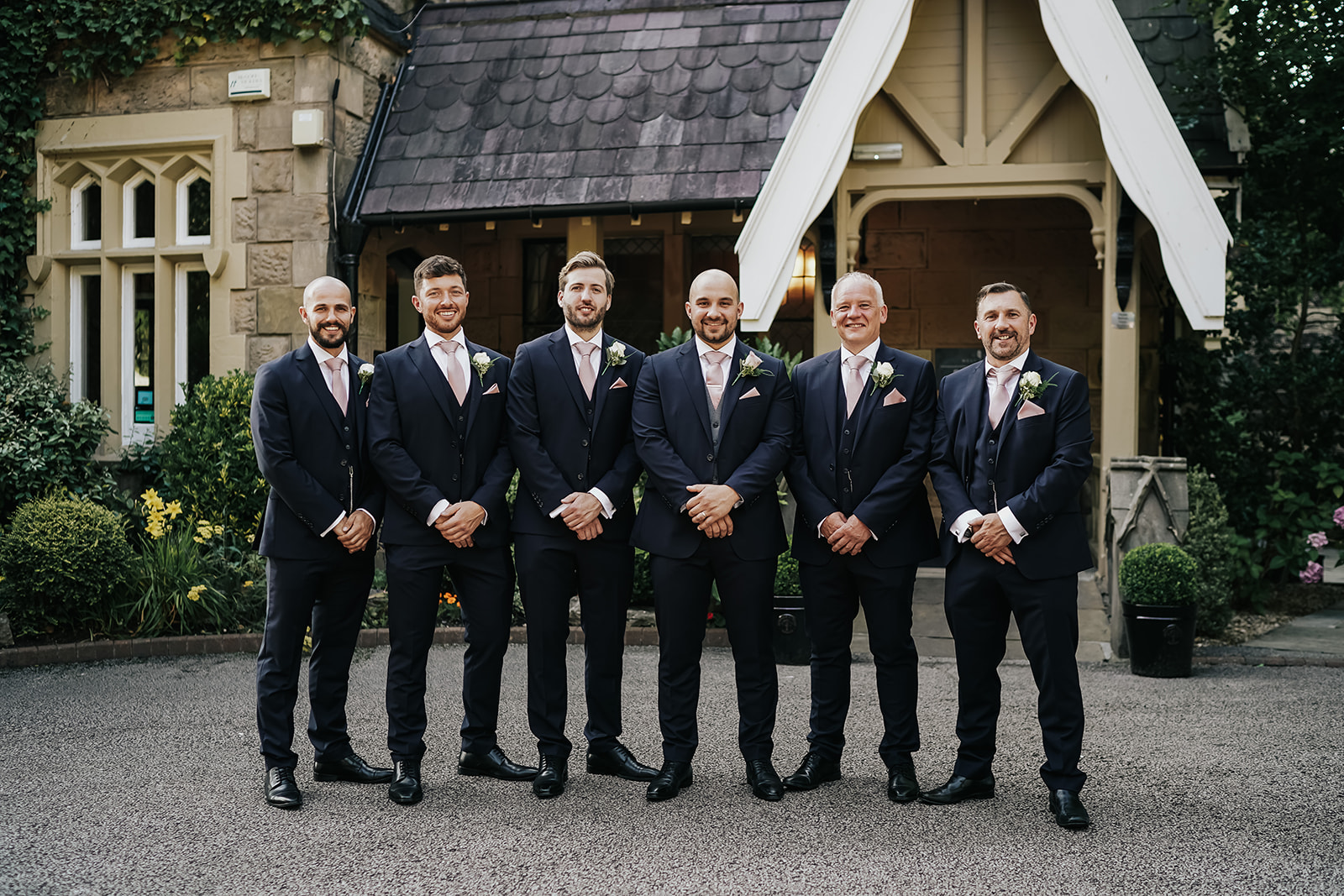 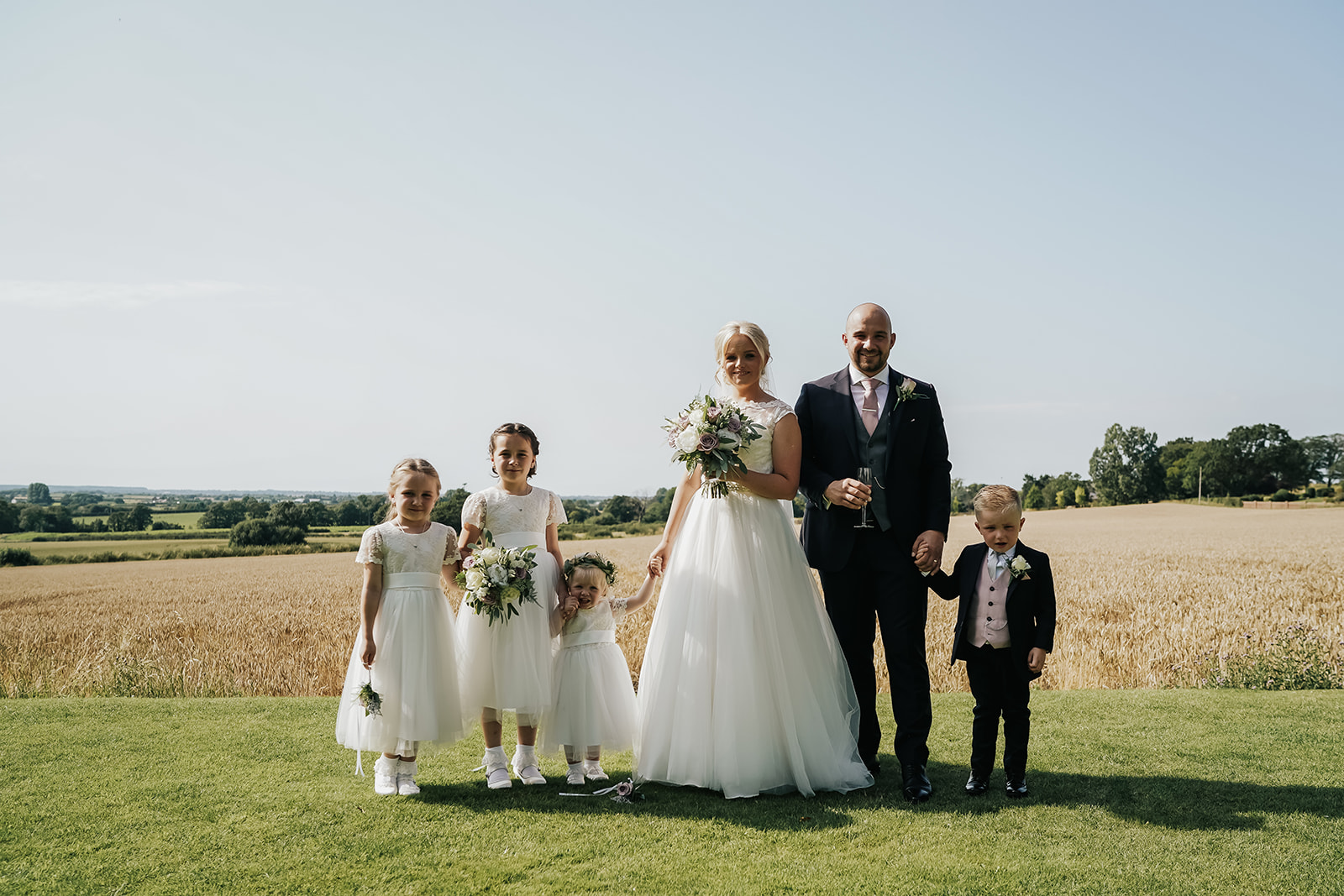 Rebecca walked down the aisle in the Ballroom with her dad to ‘Perfect Symphony’ by Ed Sheeran and Andrea Bocelli.

Writing their own vows they were truly personalised and made everyone cry (including the registrar)!

After a week of rain and thunderstorms, the sun shone on their amazing day.

A singer entertained guests on the terrace whilst they enjoyed the summer sunshine and photos were taken.

Garden games kept the children entertained with a bouncy castle being the star of the show! 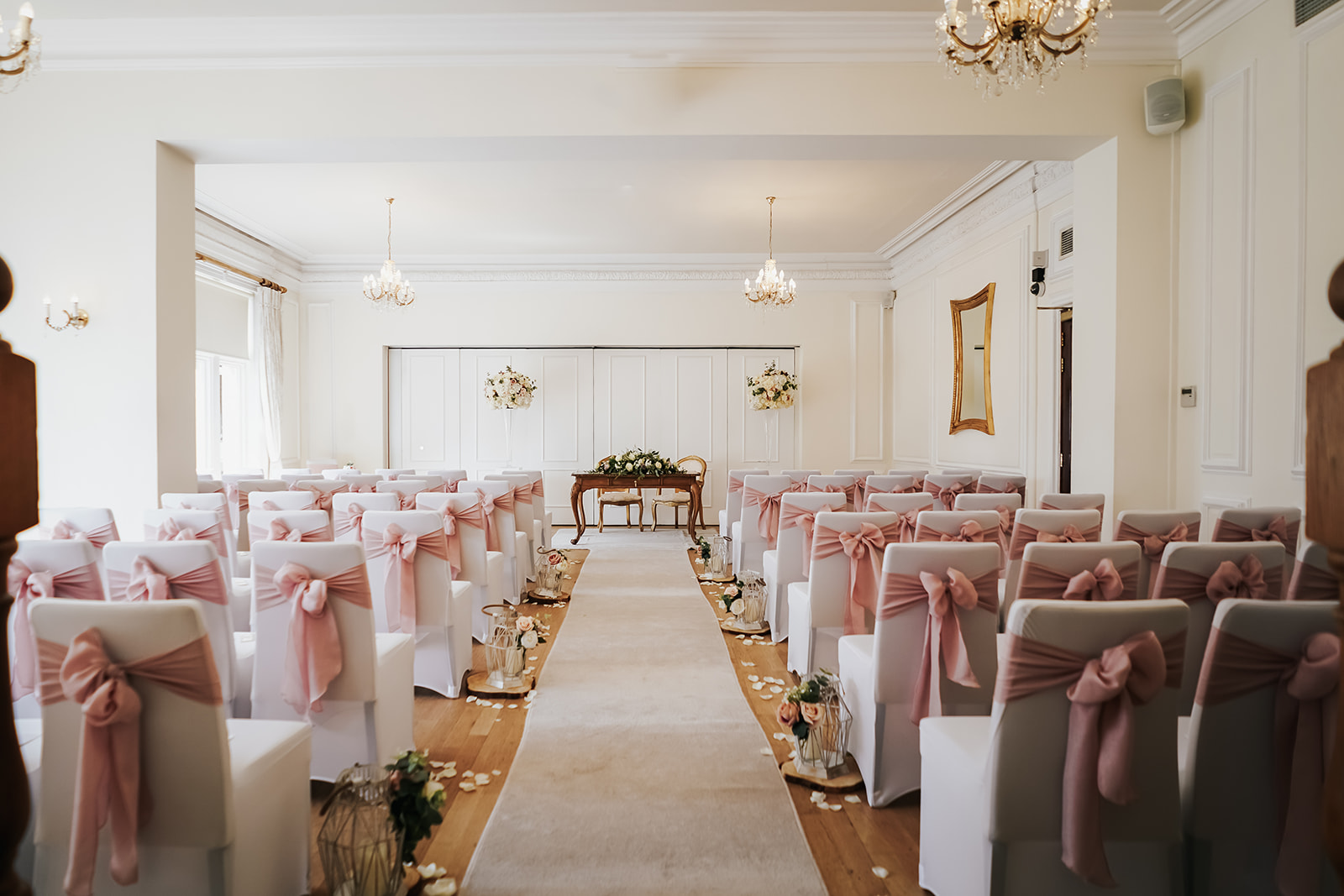 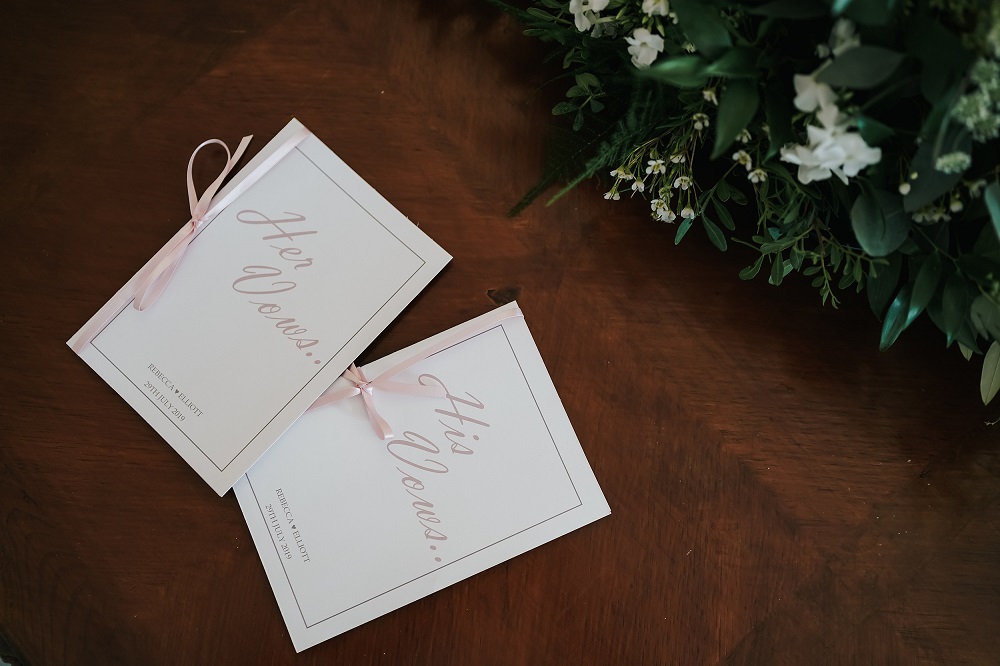 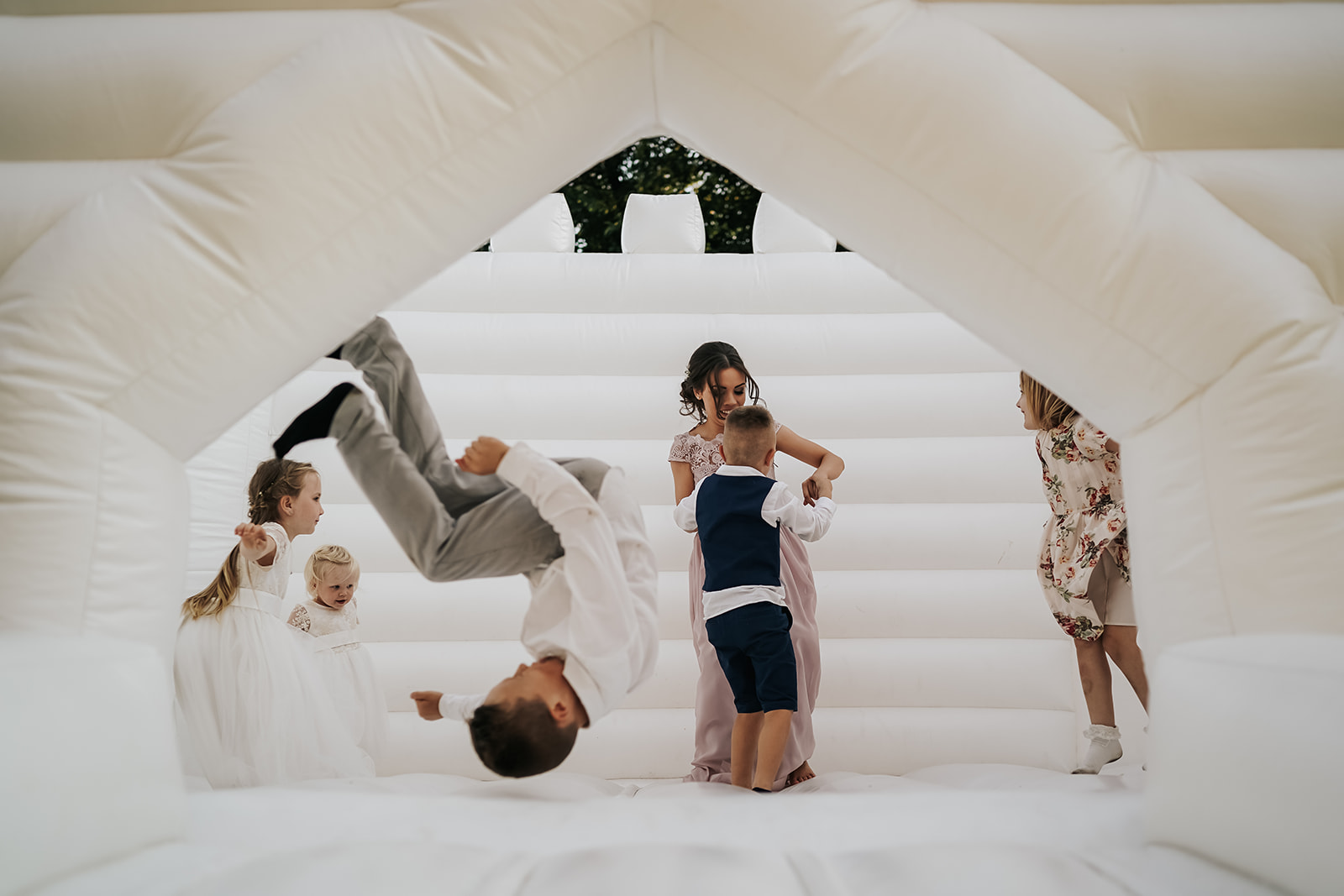 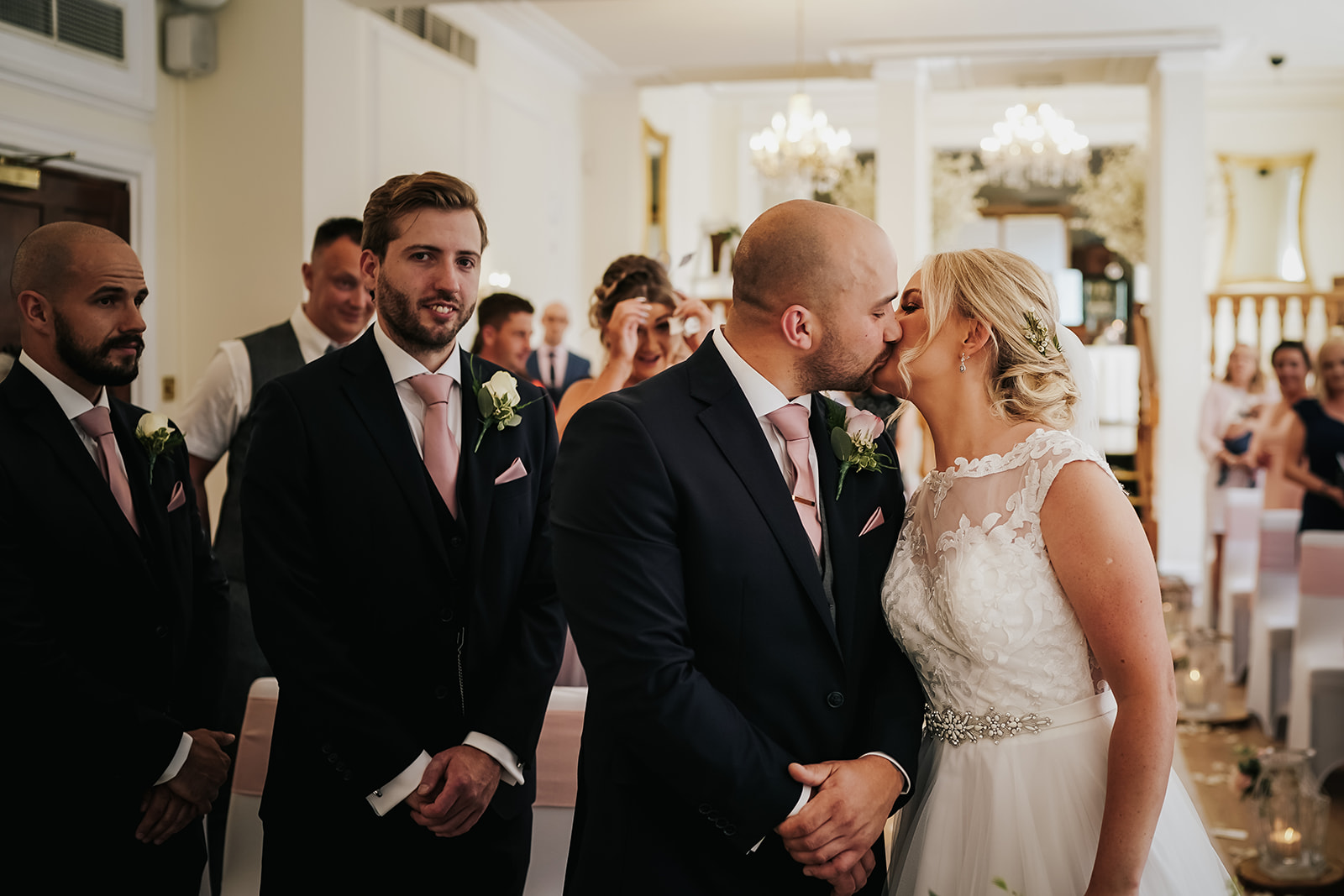 As a surprise, Rebecca’s parents arranged for a song to be written about the couple and their life together.

The whole wedding party was able to join-in the chorus when it was sung after the speeches!

Later, they were given a portable vinyl record player and their song to play wherever and whenever they like! 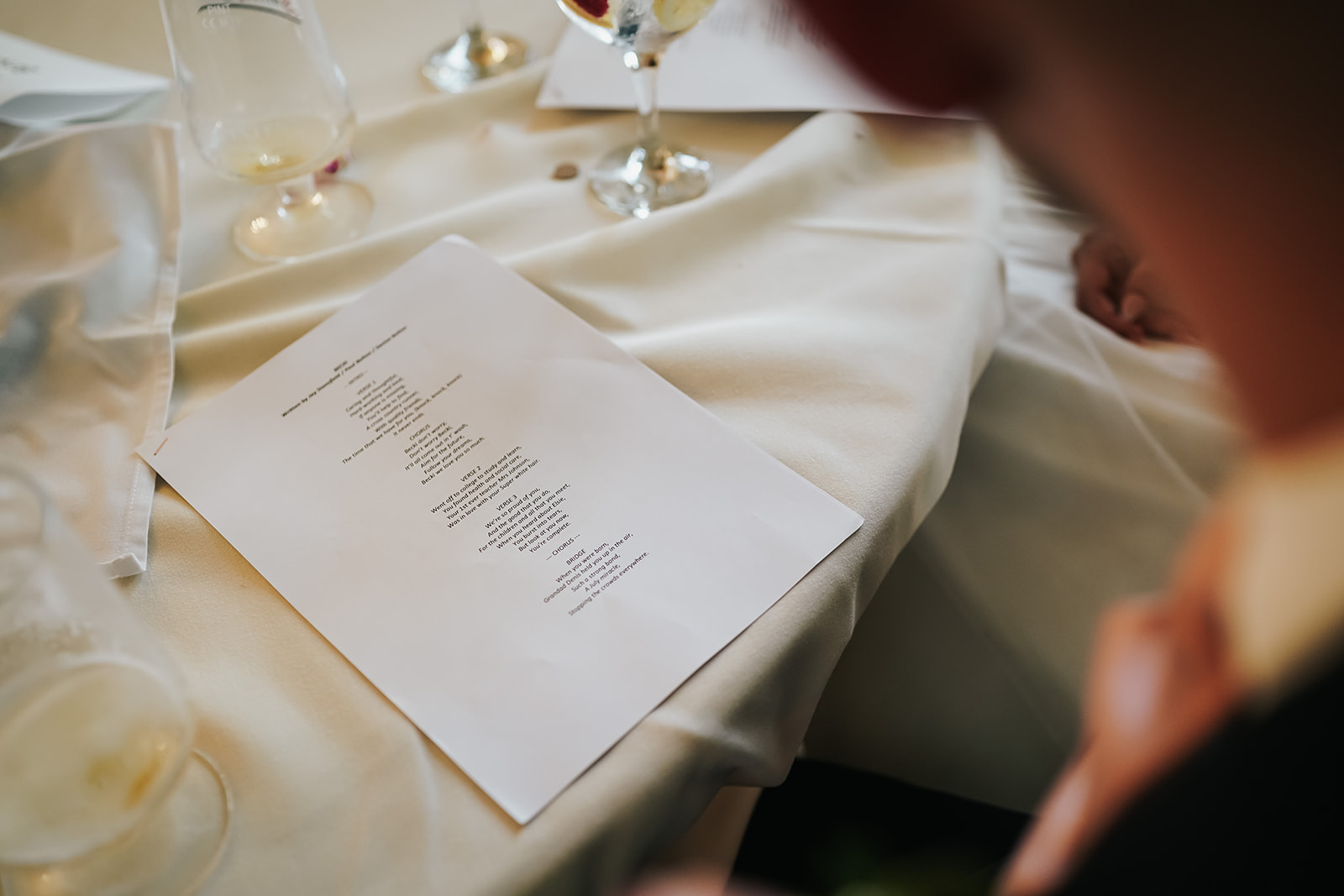 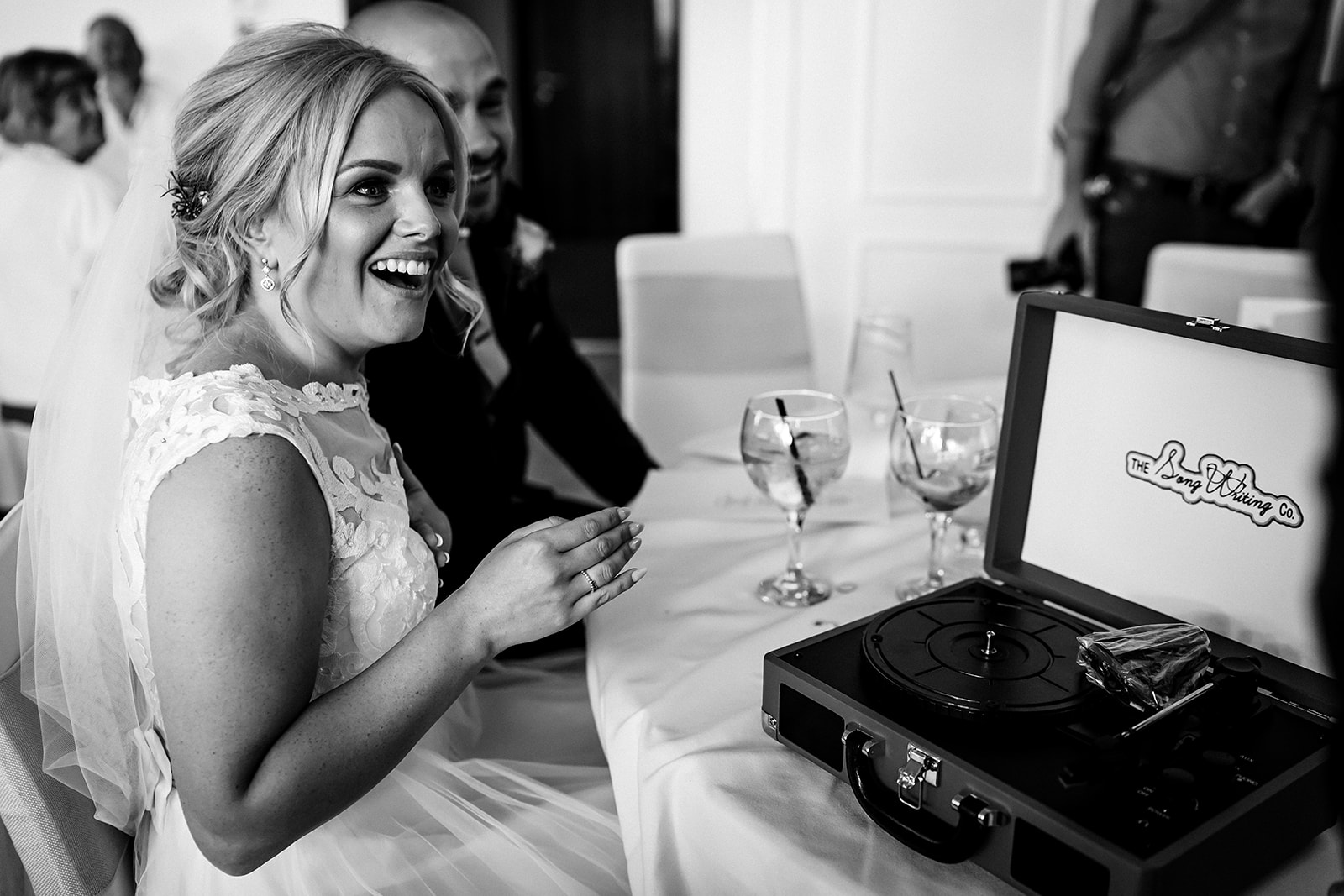 Choosing a Twilight wedding package, there was no concern about keeping all the children occupied during a sit down meal.

All their guests were treated to a Hog Roast with all the trimmings; everyone commented how delicious the food was.

Unconventionally, the ‘father daughter’ dance was first, so Rebecca’s dad could give her away on the dancefloor to Elliott.

Their first dance as husband and wife was ‘I get to love you’ by Ruelle. 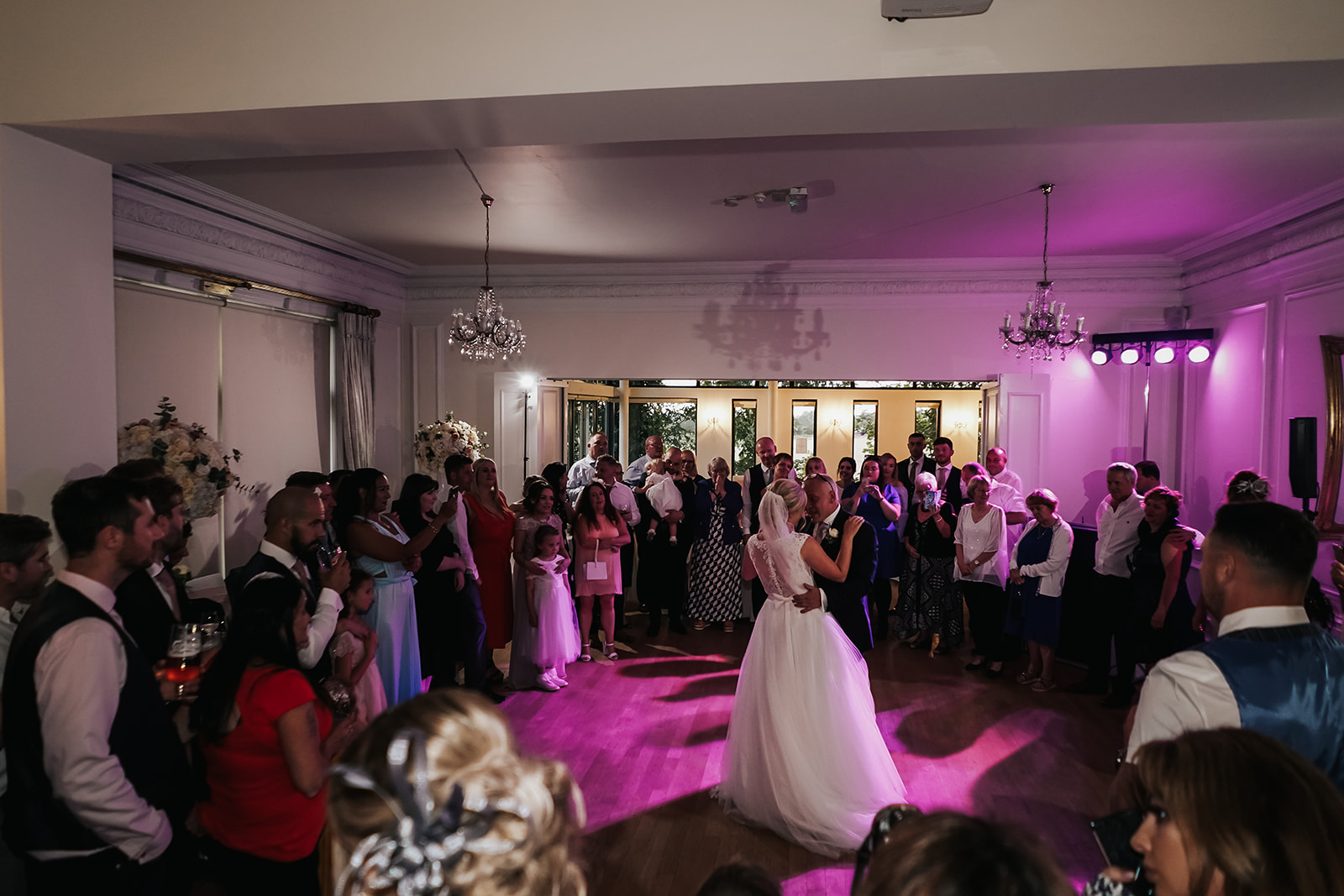 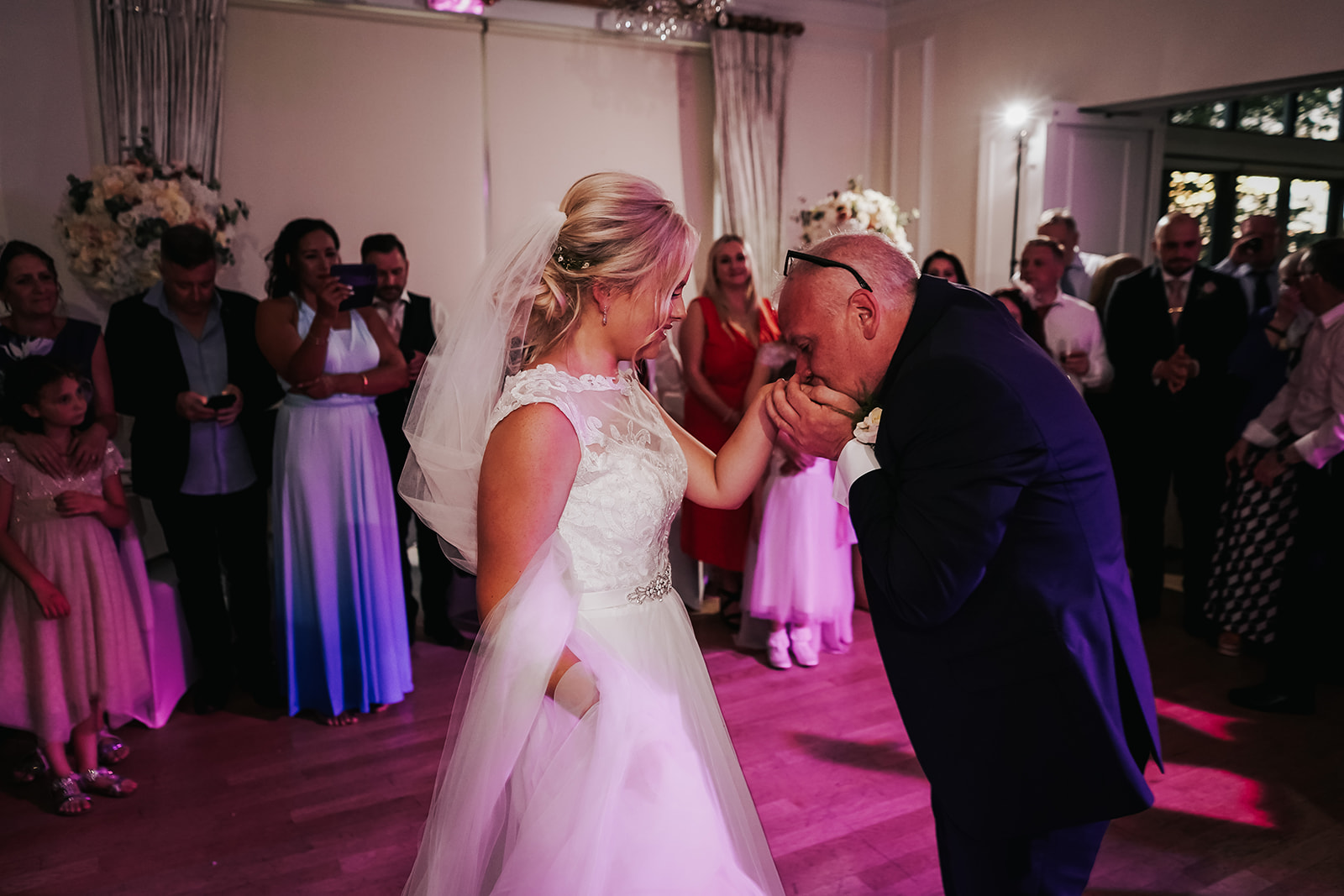 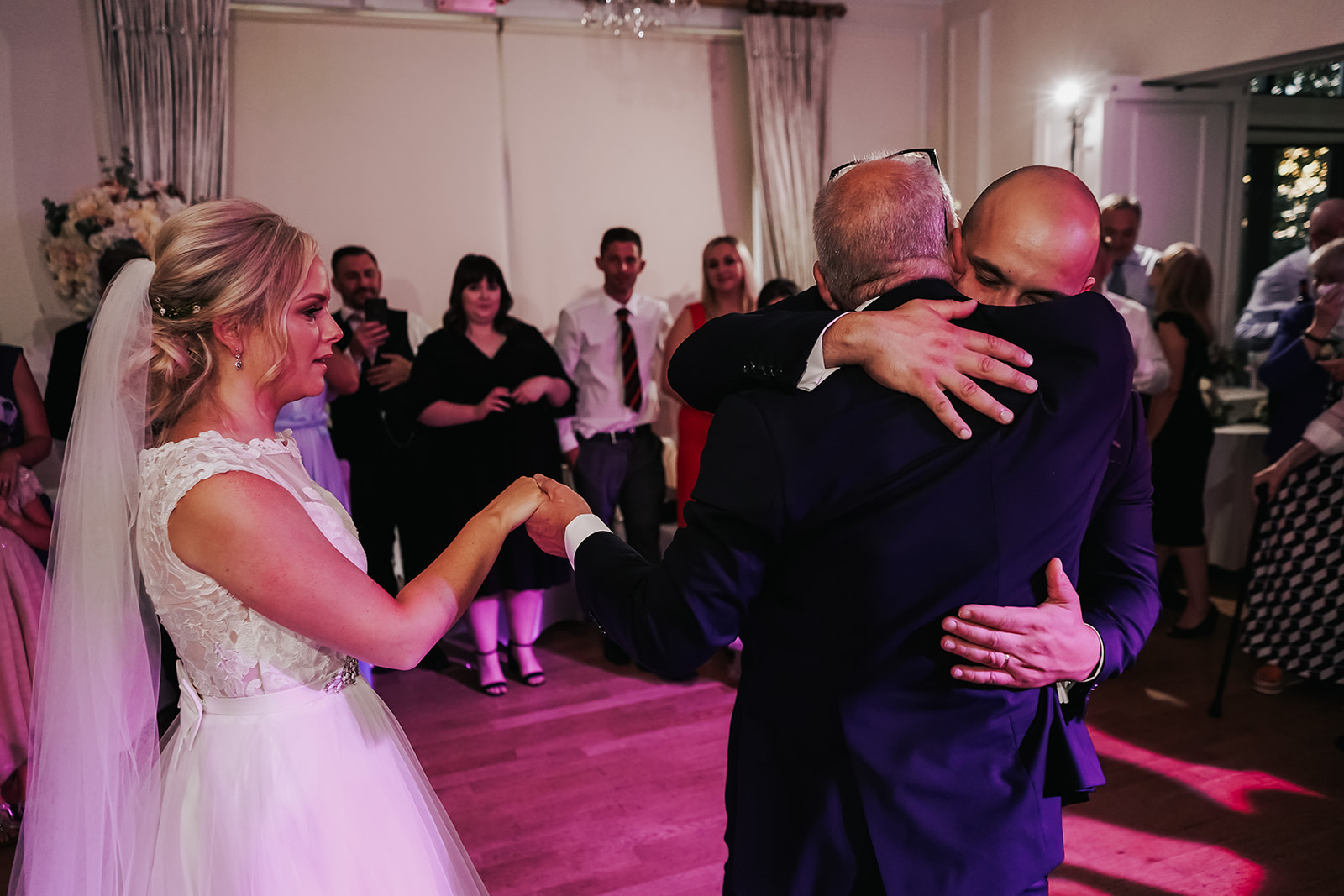 We will never ever forget how amazing our day was, and we’re still completely overwhelmed by how perfect our day was from start to finish.” – Rebecca 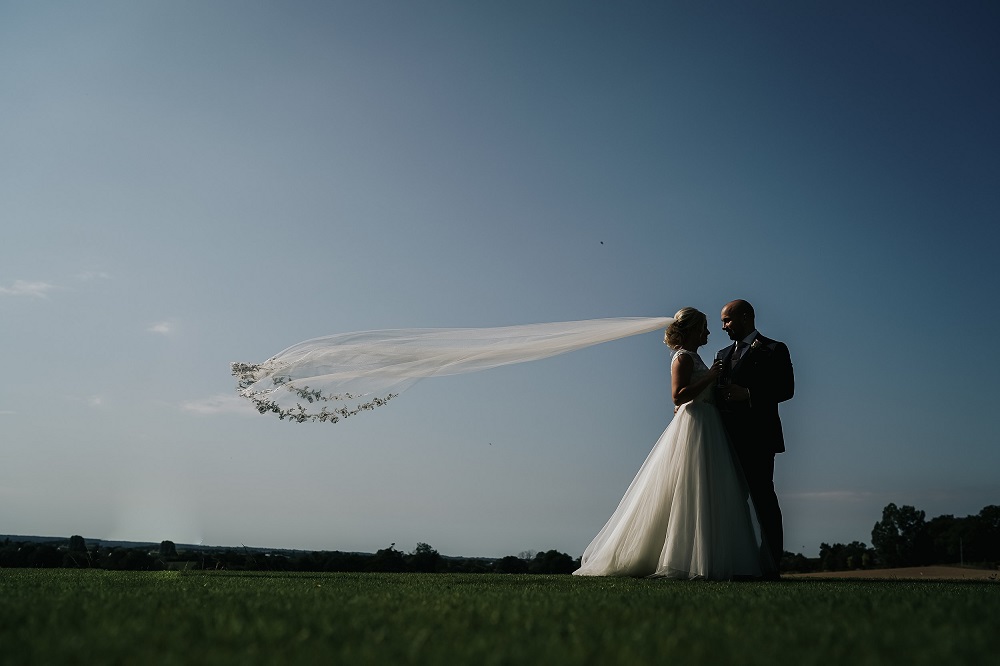