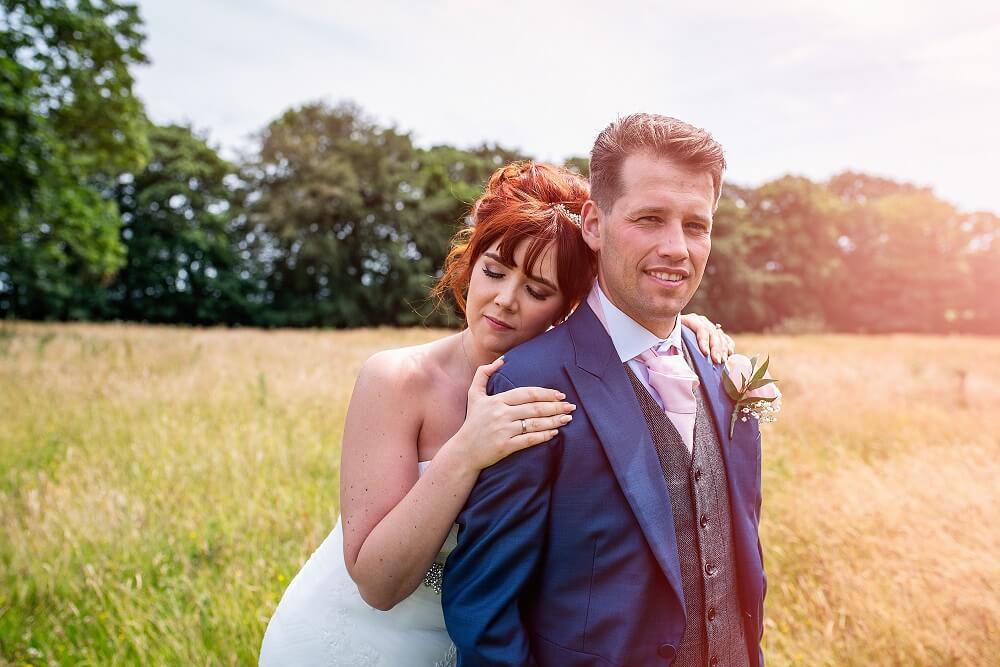 Five years after their first date on a night out after work, Alan asked Stephanie to meet him in Liverpool. Even after choosing the same hotel where they first met, Stephanie had no idea that he would produce a ring that night!
After attending a wedding at West Tower two years earlier, the couple immediately fell in love with the it; both deciding that this was where they would get married
(even though they weren’t yet engaged!)
“West Tower is such a magical place, the second you arrive you get a lovely feeling it’s the most special place in the world and gave us the most precious memories for our big day” – Stephanie

The Style of the day

First of all, Stephanie downloaded Pinterest, knowing exactly what theme she wanted for her dream day. She decided on Blush Pink and Silver as her main colour scheme, knowing that the beautifully neutral décor of West Tower would be a perfect match. Using candles, petals and jam jars along with lots of Peonies she created a magical setting.
Alan chose the cake – taking full advantage he chose four tiers of chocolate, butterscotch, fruit, and red velvet with salted caramel. 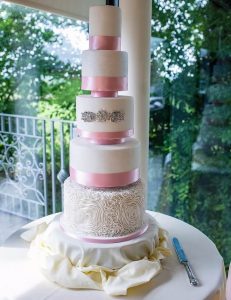 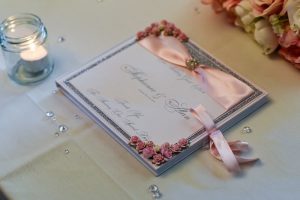 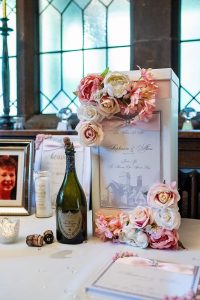 Stephanie knew exactly the style of dress she wanted from day one. After revealing her second gown on the viewing stage she said ‘Yes to the Dress’ and refused to try any others! Her Nan along with her Aunt & Best friend were all in agreement that she’d found her dream dress. Alan’s gift of Valentino heels along with a tiara and her Mother in Law’s diamanté necklace completed her look. After a last minute hitch just weeks before the wedding, Stephanie found the most perfect dresses for her bridesmaids. Adding Swarovski beading to the waist of the blush pink Ted Baker dresses, the four girls looked a million dollars. Alan and his groomsmen wore navy blue tails with a blush cravat and matching patent shoes.

Whilst guests took their seats for the ceremony at West Tower, a harpist played in the background. Stephanie and her dad walked down the aisle to Elton John’s ‘Can you feel the Love Tonight’; walking back as Mrs Riddoch with Alan to one of their favourite songs,
‘The Greatest Day’ by Take That.
Drinks and canapes were served in the sunshine with a saxophonist playing whilst the magician baffled everyone with his tricks!. Later, Dom Perignon and Bottega Rose Gold accompanied the speeches which followed a sumptuous meal prepared by the West Tower team.

Along with the rest of their entertainment, they chose their evening DJ from the suppliers recommended by West Tower. He was fantastic – really taking his time to get to know them and helping them plan their night.
‘Love me like you do’ by Ellie Goulding was the first dance for Stephanie & Alan – both of them giggling the whole way through!
Later, the BBQ served on the patio was cooked to perfection with everyone making sure they went back for seconds!
“Both of us cannot thank the team enough. We had an amazing day and everyone remarked on the venue and how great all the team were with us" – Stephanie